Smooth clutch operation in automatic transmissions is strongly tied to the velocity dependence of the coefficient of friction (COF). Full-scale clutch tests, such as the JASO M348 or any other OEM-specific test protocol run on the SAE No. 2 Friction Test Machine, are typically used to obtain friction data, but these tests are both expensive and time consuming. Further, the evaluation of each new friction material recipe or process change requires the fabrication and assembly of full-scale clutch components. Significant savings in development time and cost can be realized by screening friction materials in the laboratory prior to full scale clutch tests.

Automatic transmission clutches, also known as wet clutches, are under increasing demands for higher specific torque capacity at reduced sizes. To meet the demands in a competitive business environment, materials designers and clutch design engineers can reduce the product development time through the use of analytical models. Using such models, a large number of design and material changes can be explored, and their effect on system performance can be evaluated. A key performance characteristic in both clutches and brakes is referred to as their harshness, vibration and noise (HVN) response. HVN is strongly tied to the sliding velocity dependence of the COF. It is desired that the COF exhibit a steady or slightly increasing value as the sliding velocity increases, and also over a wide range of contact pressures. It is also well known that friction is a system property and not a material property. As such, the convenience of using analytical models in design work is tempered by the need for validation of the models, particularly the friction behavior of new clutch materials. Further, the benchtop tests must meet the subsequent burden of proof of performance compared with the full-scale device or system.

Full-scale clutch tests are conducted on test systems, such as the SAE #2 Friction Test Rig.

Assessment of the COF Behavior

As described above, to minimize HVN and assure smooth clutch performance, it is desired that the COF exhibit a steady or slightly increasing value as the sliding velocity increases. A decrease in the COF with increasing velocity can lead to clutch shudder or judder. While there are analytical models that incorporate clutch-system stiffness, material pairs, rotor/stator contact pressure, temperature, sliding velocity, and COF, experimental data are still a required input for the COF, particularly as a function of the other variables. Full-scale tests, such as the JASO M348-2012 or any other OEM-specific test protocol run on the SAE No. 2 Friction Test Machine, are typically used to obtain such data. However, these tests can be expensive and time consuming, and they require the fabrication and assembly of full-scale clutch components.

It would be expected that savings in both cost and time during the material development period can be achieved if a simple benchtop screening test could be used to rank materials prior to their selection for fabrication into parts and implementation in a full-scale test. This includes the clutch material itself, the reaction plate, as well as the fluid in which the clutch operates, in this case referred to as automated transmission fluid (ATF). The purpose of this research and development effort was to devise a benchtop material screening test and protocol that could be used to pre-screen materials prior to moving ahead with fullscale testing. The success of the effort was measured by the ability of the benchtop test to rank materials in the same order as that of the full-scale tests. It was not the aim to exactly replicate the full-scale test protocol, which consists of more than 275 separate conditions of speed, contact pressure and temperature, but rather to develop a simplified subset of test sequences on the benchtop tester from which the same relative ranking of materials could be determined, including the velocity dependence over a wide velocity range.

While the contact pressure, sliding speed and temperature are obvious choices for proper simulation, a minimum contact size is also important in benchtop friction material testing. This is because of the non-homogeneous nature of clutch materials, and the need to include all constituents as well as the reservoir and channeling effect of the surface roughness and porosity. Such variation in surface texture is shown in the images to the right, via 3D topographic images obtained using a Bruker white light interferometer (WLI). If the contact is made too small, the effect of both the inhomogeneous composition and the surface roughness on the friction can be lost, and the benchtop test will not properly simulate the actual tribosystem.

The following additional full-scale parameters were deemed to be important to the simulation in the benchtop test:

The benchtop test system, a UMT TriboLab equipped with a rotary drive, heating chamber and liquid pumping system, along with a close-up example of a sub-scale clutch test sample, are shown in the image to the left.

The images on the right show the COF results of step-speed clutch material tests conducted at 120°C on both the UMT TriboLab benchtop system and the full-scale test rig. The agreement is very good in the relative rankings, curve shape as a function of velocity, and the magnitude of the COF for each material.

A positive slope to the COF versus velocity curve is seen for Material B, making it a viable choice for use in the clutch design modeling. Other sub-scale test sequences, including breakaway COF and speed ramp also showed a very good correlation with the data from the full-scale test.

By properly applying the equivalent contact stress, acceleration, sliding speeds, fluid conditions and temperature as used in the full-scale clutch test rig, the UMT TriboLab serves as an excellent benchtop screening tool, which can provide input to modelling efforts as well as accelerate the decision time and reduce the costs of down-selecting of materials for final proof in full-scale clutch rig testing. 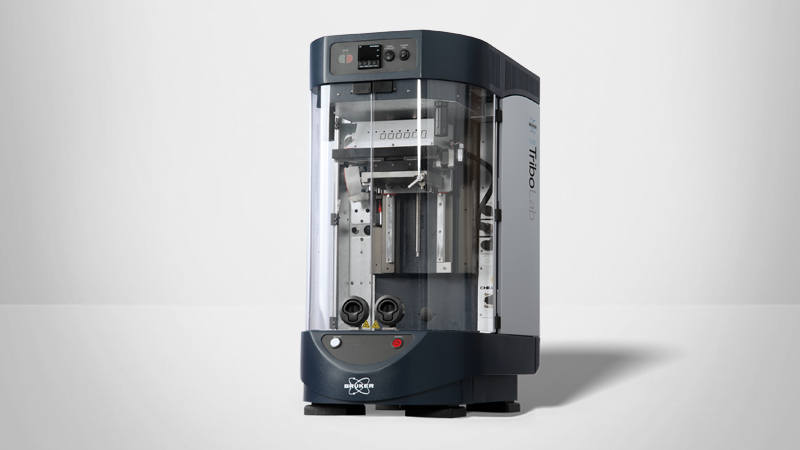