The study of structural components of solid-state compounds in the material sciences often relies on the use of nuclear magnetic resonance (NMR). While NMR is an effective method for gaining an observation of structure and activity of small compounds, its low level of sensitivity can obstruct researchers from performing a time-efficient experiment. Dynamic nuclear polarization (DNP) has become increasingly prevalent in NMR studies to enhance signal intensity and reduce experiment duration.

In addition to boosting signal intensity in NMR, DNP can enhance spectroscopic sensitivity, providing more opportunities in the study of materials in NMR studies. DNP-NMR spectroscopy assists in studying biological structures, activity, and interactions in materials such as bio-materials, catalysts, functionalized silica, nanoparticles, mesoporous samples, and natural and synthetic polymers.

Bruker’s commercial DNP-NMR spectrometers function at 9.4, 14.1, and 18.8T. Perhaps the most ideal choice for DNP in catalysts applications involves using one of the lowest field Bruker spectrometer, the 9.4T.

Hybrid organic silica is made up of various organic components that are covalently bound to a silica matrix. A molecular characterization of silica functional groups can help facilitate further understanding of silica activity, specifically in regard to the modes of interaction and binding on the surface.

One study using DNP-NMR looked at the interaction between biomolecular solids to functionalized silica, using biradical TOTAPOL in solvent. Following analyzation of the compound with DNP-NMR, researchers found that DNP enabled a deeper look into the patterns of silica-surface functional groups in the matter of minutes.

Mesoporous materials, like mesoporous silica, is commonly used in the study of catalysis and drug delivery. To study the interaction between the surface of materials and other compounds, DNP-NMR is commonly used to produce a clear image of the compounds’ activity. NMR spectroscopy’s low sensitivity is further impeded by the small fraction of surface sites on mesoporous samples.

Using DNP, researchers are able to transfer the large polarization of unpaired electrons to surrounding nuclei and provide a signal enhancement between 10 and 200, reducing experiment time and improving the quality of the overall experiment.

High-field DNP can also improve sensitivity in experiments studying natural and synthetic polymers. According to some reports, sensitivity enhancements between 5 and 40 have been noted, depending on polymer type, DNP sample preparation method, and molecular weight.

In certain polymers showing a high level of affinity for oxygen, researchers might be able to increase proton nuclear relaxation times by removing the absorbed oxygen from powdered solid-state samples. This, in turn, can provide a two-fold sensitivity increase in the DNP-NMR experiment, resulting in a greater reduction in experiment duration.

The DNP spectrometer offered by Bruker has been designed to overcome the low sensitivity inherent in solid-state NMR experiments while assisting in reducing signal duration and experimentation time. Material, biological, and pharmaceutical sciences often use DNP spectrometers in their research of functional groups and the structural anatomy of various compounds. Via a high-power gyrotron system, Bruker’s DNP spectrometer transfers polarization of unpaired electrons, enhancing signals from 20 to a factor of 200 by microwave irradiation. 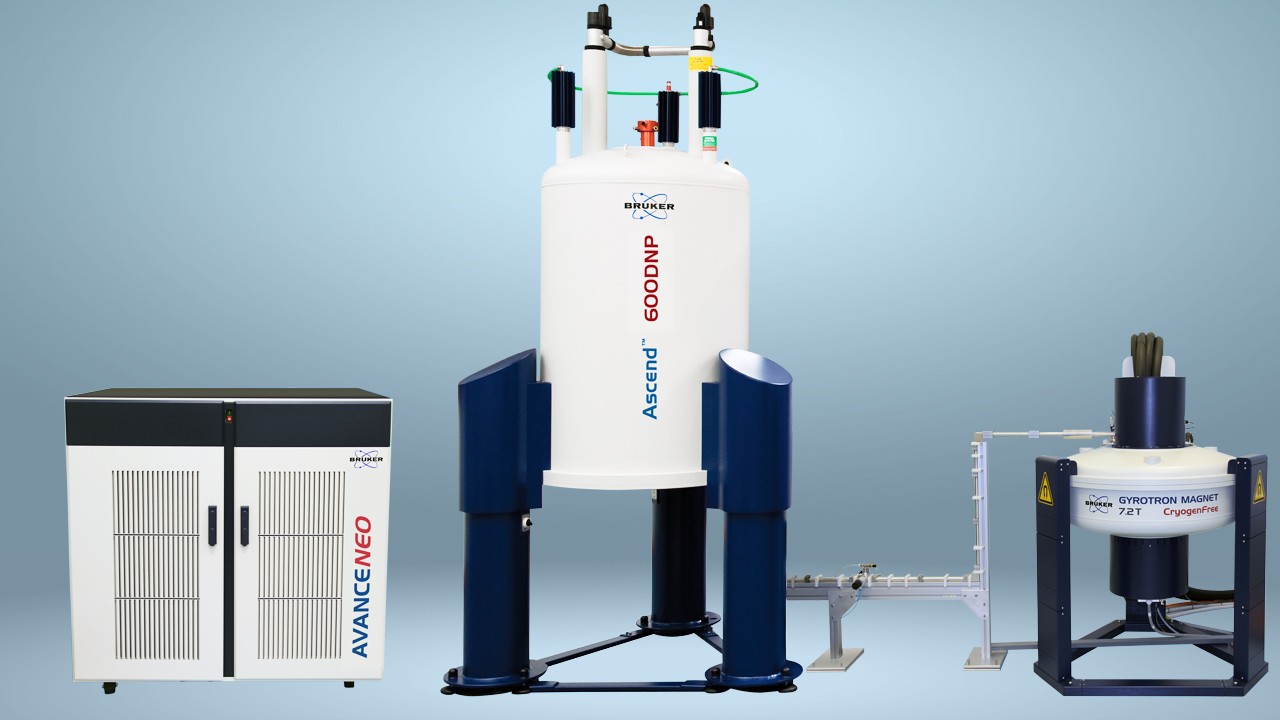